If you are an overseas Pakistani and you wish to divorce your wife or obtain a decree of khula from a Pakistan family court, you can do it without your presence in Pakistan.

(i) An overseas Pakistani husband wishing to divorce his wife (who is residing in Pakistan or whose ‘last known address’ in Pakistan is known), will execute a divorce deed and a special power of attorney, nominating any person present in Pakistan as his representative, and get these documents attested from Pakistan High Commission in the country of his stay and send these documents to Pakistan.

(ii) The divorce deed and special power of attorney will be counter-attested by Pakistan Foreign Office.

(iii) After attestation of these documents from Foreign Office, the representative, nominated through the special power of attorney, can file for Divorce Certificate in Arbitration Council of the area where wife is currently residing or where her ‘last known address’ is and initiate divorce proceedings.

(iv) After initiation of proceedings, the Arbitration Council takes 90 days to issue the Divorce Certificate.

A Pakistani woman residing outside Pakistan can also file a case for obtaining a khula decree from a Pakistan court without coming to Pakistan, through the following procedure:

(i) She will execute a special power of attorney nominating any person as her personal representative. This power of attorney will be attested from Pakistan High Commission in the country of her stay and counter attested by the Foreign Office in Pakistan.

(ii) The personal representative nominated by the wife should have power to represent her, appoint a lawyer and sign documents on her behalf for proceedings in the family court.

(iii) The personal representative then can file a case, through a lawyer, in a family court for obtaining khula decree.

(iv) After obtaining khula decree, proceedings in Arbitration Council can be initiated for obtaining Divorce Certificate. 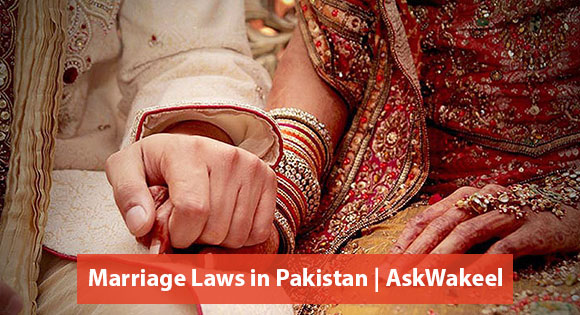 Pakistan marriage law is governed by Muslim Family law ordinance 1961.  After partition in 1947, in 1961, Muslim family Laws Ordinance was passed, which drew a lot of criticism from religious leaders.  Under Islamic law, the validity of a marriage contract does not in anyway depend on the performance of any recorded ceremony or documentation, capacity, mutual consent etc. The witnesses on the occasion being the only requisite to make the contract valid and binding.  The law requires that every marriage solemnized under the Muslim Law shall be registered in accordance with the provisions of `Muslim family Laws Ordinance.’  Section 6 of the Ordinance deals with Polygamy. It states that no man, during subsistence of an existing marriage, shall except with the previous permission in writing of the Arbitration Council, contract another marriage, nor shall any such marriage contracted without such permission be registered. With regards to Islamic stance in polygamy, the verse from Quran states, “…marry women of your choice, two or three or four; but if you fear that you shall not be able to deal justly with them, then only one.” (Quran 4:3)

The bottom line is that if a man marries more than 4 wives, he must be able to do justice to all of them and deal them equally. If there is fear that he will not be able to do so, he must not marry more than one.

There is a lot of controversy between what the law states when it comes to consenting adults wanting to marry and their parents are against their marriage. Well the position of the law is that when adults are consenting and of the required age, they are free to marry and record the same in presence of witnesses and parents can not stop them from marrying their chosen partners. However, the Islamic position is actually in contrast. Islam clearly requires the permission or consent of wali before a woman can marry a man.

The Messenger of Allah (saws) said: ‘The marriage of a woman who marries without the consent of her guardians (wali) is void.’ (He (saws) said these words three times.)

Islam on the other hand is also against forced marriages and does not consider a marriage valid where the girl does not consent.

It is not permissible for the guardian, whether he is the father or anyone else, to marry off anyone under his care without her consent, because the Prophet (peace and blessings of Allaah be upon him) said: “A previously-married woman has more right concerning herself than her guardian, and the permission of a virgin should be sought (regarding marriage), and her permission is her silence.” Narrated by Muslim, 1421.

In Islam, consent of girl and her father is important for marriage. But this is something which is not contained within the provisions of Pakistani law.  The law simply states that offer and acceptance by or on behalf of two sane Muslim adults of opposite sex in the presence of witnesses to marry each other. With dower also a necessary concomitant of a contract of marriage.